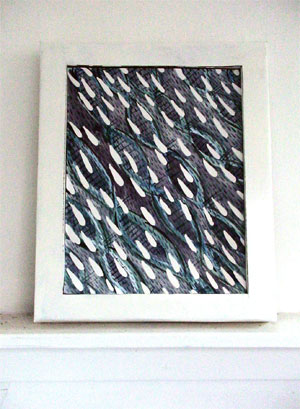 
Ewe studied at Camberwell College of Art and Edinburgh College of Art & Design and is based at Woodmill studios in Bermondsey where he works with film, photography and drawing. Recent group exhibitions include ‘Bilateria’, 500 Dollars Gallery, London (2009), ‘The Devils Necktie’, Woodmill, London (2010), ‘Spare Room’ at Present gallery in Newcastle (2010) and S.A.G.S. Woodmill (2011). The residency will culminate in an exhibition at Coleman – the artist’s first solo project in London.

The emerging artist is currently best known for time-based projects such as ‘Sex Positions for Singles’ (a darkly funny, grungily melancholic photographic series depicting the artist deadpanning his way, alone, through imaginary sex scenes), shown at the Photographers’ Gallery and CGP London. Recently he has been working in three-dimensions, using objects, plants and drawings to explore similar human lines of enquiry; humour as a tool to engage the viewer with particular social contexts and mores associated with awkwardness, alienation and the ridiculous.

The main gallery space at Coleman, a former hairdressers, will become Ewe’s temporary laboratory in which he will create  ‘Sheryll’: an ambitious installation work of many parts made in response to the space. ‘Sheryll’, an evocative point of domestic reference, is for Ewe more of an interior (design) state of mind than an actual being or social type:

The weather changed and my body was put on a shelf indefinitely away from contact with others but from that shelf I could still see other bodies pass me by. Attraction took on a different taste, a different tone, a different name: ‘Sheryll’.

Ewe is interested in the innate responses particular everyday materials, motifs and ways of making elicit and has begun to develop his own visual shorthand for things and means associated with the decorative or design-lite. These elements so far include a series of watercolours, old-fashioned punch-line jokes and cardboard sculptures, intuitively constructed and built with the purpose of being edited into and possibly out of this taste-conscious multiwork.