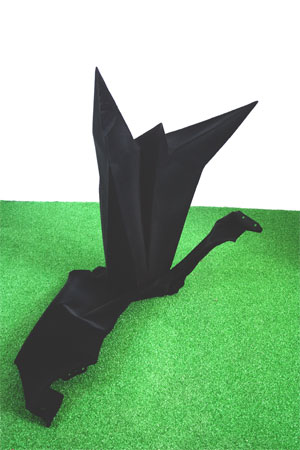 Islands
Richard Ducker, Gibson / Martelli
‘. . . . Places that exist in reality, but may only be found in the imagination.’
– Judith Schalansky, Atlas of Remote Islands

Islands is concerned with myths and heroics, sci-fi worlds of the past and present that describe the very different ways analogue and digital technologies have and continue to shape the look and feel of ‘now’.

Ducker’s installation Dark Matter Flowers  explores the cross-over points between Modernist sculpture and a fantasy vision of the future essentially locked in the past, while Gibson/Martelli will re-visit the past through the virtual with two new works based on their residency in the Arctic Circle.

Gibson / Martelli  work with the technologies and formal devices of video gaming to explore ideas of the sublime. They fuse the products of the enormously popular gaming industry with their humanistic vision. Their application of the gaming vernacular speaks to the contemporary preoccupation with screen-based and interactive technologies in the search for meaning and mediated experience.

Gibson/Martelli are Artists-in-Residence with CAFKA / Christie in Canada working with a CAVE virtual environment on a new installation In Search of Abandoned for the CAFKA 14 Biennial.
Based in London, Martelli graduated from Central St Martins, Gibson graduated from University of Kent at Canterbury.
Their first collaboration won them a BAFTA nomination and other projects have featured in numerous exhibitions and festivals world-wide including the 52nd Venice Biennale.
Richard Ducker has exhibited throughout the UK and internationally, including: ICA, London; Kettles Yard, Cambridge; Serpentine Gallery,  London;  Royal Academy,Edinburgh; Mappin Gallery,  Sheffield;  The Yard Gallery,  Nottingham; The Kitchen,  New York; Katherine E Nash Gallery, Minnesota, USA; Standpoint Gallery, London; Cafe Gallery Projects, London; and Anthony Reynolds Gallery, London. Ducker is founder and director of Fieldgate Gallery and continues to curate under the name of Fieldgate Gallery.