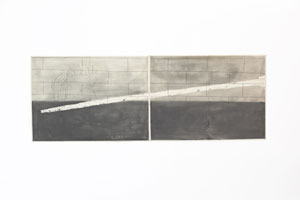 Duck is concerned with the capacity of images to distort and confuse the telling of history. Focusing on the spaces between the personal and the collective memory, he combines autobiographical elements alongside an array of external references to explore notions of memory, scale and myth. The sources quoted from in these time-intensive works include Gauguin’s Tahiti, Rome under Nero and remembered bus-stop graffiti from the village in which he grew up.

The title of the exhibition, echoing Duck’s multi-layered and fragmented approach to making and display, is equally open to interpretation. On the one hand it alludes to rurality and the assumed simplicity of such when compared with the modern, constructed nature of the city. Yet it also suggests a collection, of flexible proportions, and the significance a lone stick might convey as a potential tool.

The works made for Coleman Projects depict scenarios as real as they may be imaginary. With his pared-down aesthetic, Duck seeks to eschew the definite, presenting flattened-out motifs floating adrift in spaces devoid of scale or depth. Most works comprise various layers or screens that serve to disrupt and disorientate any single given reading.

What at first might appear as abstract traces are in fact forms borrowed from the Tahitian sketchbooks of Paul Gauguin. A crudely carved cameo, for example, is actually Henry Morton Stanley, the famous Welsh explorer of central Africa, labouring under the weight of his pith helmet. Plants, placed on walls as if under moonlight, appear positively awkward as sculptural elements, while the presence of a giant thumb offers as much of a nod to social media as to life in Ancient Rome. Underpinning these works is an interest in surfaces – in terms of both material site and the skin of first responses – as well as the subjective processes at play when it comes to interpreting and recording encounters.

← ways from here to there
Annual Residency 2015 : True,False and Slightly Better →