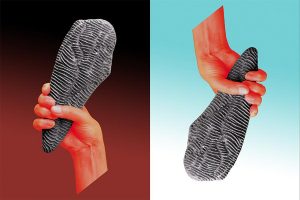 Coleman Project Space is pleased to announce a solo exhibition by Katrin Hanusch.

Gravity’s Rainbow, the title of this exhibition, is a novel as famous for the author’s in your-face structural stance as the outlandish sexual exploits of his literary protagonists, including a man whose cock appears to operate as a divining rod for military rocket impact sites. With this solo show of objects and moving images, Katrin Hanusch appears to connect with author Thomas Pynchon’s dark humour and highly orchestrated sense of pinballing between the profundity and pointlessness of it all.

The world of men – the macho materiality of weaponry and the male history of sculpture (and of pilfering cultural objects) – is very much present in these works, but at no point does one get the sense that Hanusch actually wants to bludgeon her audience with a blunt ‘message’. Rather, her irreverent treatment of motifs and matter reveals as much about the innate sensuality of ancient and modern, precious and throwaway things as the basic human urges – sex, violence, consumption – that likely brought them into being and continue to feed their appropriation.

If there’s a conceptual space Hanusch wants to take us to, it’s one, if not exactly fraught with, then humorously full of contradictions. Her magazine-girl-hand-with-club gif is, at points, as physically annoying as it is modishly easy on the eye: as the tempo speeds up, the veins of wrist and grooves of the ‘artefact’ appear to combine with porno theatricality. Bronze and aluminium “future fossils” dressed in underwear and neon tubing stir up dusty recollections of time – as experienced in the museum and on the dancefloor. The gallery appears as much a Mighty Boosh-style set for a play on recycling as a hallowed venue in which to consider objecthood. One person’s weapon, or prized possession, Hanusch seems to say, is another’s fashion accessory or sex toy.

Katrin Hanusch a recent graduate of Royal College of Art lives and works in London. She has been the recipient of several fellowships and awards including Emerging Artist Residency Award · Scottish Sculpture Workshop · Lumsden and recently completed a fellowship at Chelsea College of Art Foundry, and continues to exhibit in group exhibitions UK and abroad.