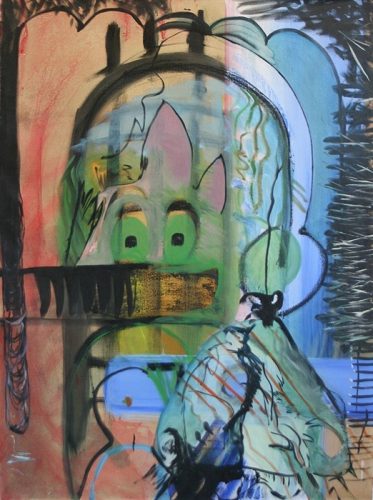 Gemma Lowe will show a series of new paintings, a sound installation for the shed space at Coleman Projects, and produce a small ‘zine. Her works on canvas collectively propose a series of compelling, yet rather elusive, narratives. The fresh and direct nature of her paint application gives rise to the idea of new visual languages in development, between abstraction and figuration, and a sense of what it feels like to negotiate today’s increasingly managed, and confusingly imbricated, data platforms.

Each work describes a complex moment in the distillation of imagery and ideas, but, where are we? Referentially, Lowe’s assured, yet delightfully loose, painterly style takes one from Picabia to Tala Madani. Her portrayal of living beings, for example, is often more creature-like than human, while her freehand marks appear diaristic in their immediacy. Like those before her, Lowe also appears to acknowledge that seduction plays as much a part in the negotiation of art as it does in commercial marketing material, editorial or other content. In this case, however, we are being seduced into engaging with the nature of how and why we are being wooed.

Lowe is interested in the oddities that emerge from the deliberate or accidental juxtaposition of images – still and moving, both online and in the physical day-to-day. She effectively catalogues her experiences with media and other imagery, turning them into collages and sketches before committing the details to canvas. Her titles provide possible clues as to the context of borrowed imagery and remembered encounters, but the resulting responses are rarely definitive. ‘Eton Mess’, a globular, tented pile of heads and limbs, might lead one to speculate about news of Tory shortcomings or the results of the Bake-Off, while the ‘Good Citizen’ positively challenges the viewer to find focus in a mash-up of potential portrait and still-life scenarios, presided over by a large pair of cartoon eyes. 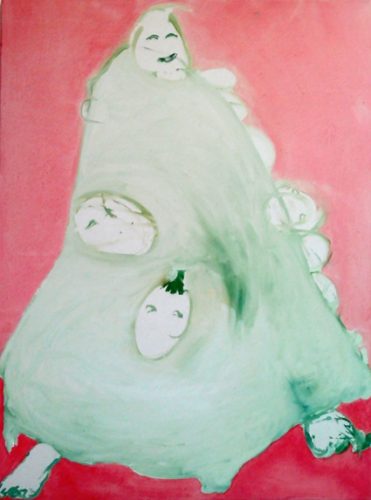 There are too many sophisticated chromatic combinations, linear articulations and compositional choices in play to suggest that Lowe is that concerned about the overwhelming nature of navigating the image economy. But, given the fluidity of her methods, neither does she appear keen to locate a fixed point in the everyday melee from which to observe curious moments of happenstance, or the means though which information is politicised and messages and things are sold. Rather, the viewer is drawn into a meaningful state of flux; the process of trying to figure out a range of variably banal, disturbing and humorous visual relationships.