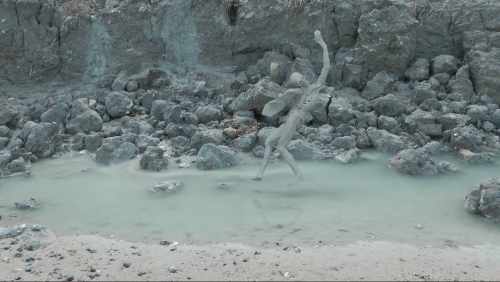 these equals slave goes like this
no more commoner adventurers
slaves and opponents for a kiss
users, cases dead and gone
existence of the eternity
tormented dreams without urge
my single appointees scourge
two lives and two true machines

‘Two lives and two true machines’ explores notions of regulation and control in a world where personal information is a key currency and its management by non-human intelligent life is increasingly pervasive. This collaborative project is the result of shared interests and conversations between artists Thomas McCaughan and Justyna K. Kabala, and all works have been developed alongside and in relation to each other.

The title of the exhibition is the last line of a poem made using an automatic poetry generator, a programme based on the same pattern recognition techniques used for machine learning. While some of the works appear in the form of studies and simulations, others are more matter-of-fact, like product demonstrations or displays. The use of transparent cases, seals and environmentally controlled containers refers here to methods of monitoring and management.

The installation in the main gallery is a restaging of a damp and partially mouldy curtain once seen through the steamed-up window of a strip club – an allusion to the idea of ‘work’ in a space where the body is most obviously a resource employed in the service sector. A velvet curtain has been encased in clear acrylic and fitted with a system to control the humidity, encouraging the growth of mould for the duration of the exhibition. The floor of the gallery has been covered with a series of images sourced from CCTV footage, inadvertently broadcast online – an unforeseen consequence of the abundance of cheap networked surveillance systems.

The works in the shed space examine inefficiencies of the human body in relation to new modes of labour and automation. This is referenced through the appropriation of technologies, materials and processes used in medicine, biotech and robotics that extend the working life of bones and replicate muscle function synthetically.

An accompanying film and publication have been produced by the two artists with contributions from Cian McConn and Matthew Stuart. The film features the Creative Commons scan of Ligier Richier’s ‘Death as a Skeleton’, which has been tracked to video footage of landscapes and cut with imagery of an assembly robot model, yumi.

The publication, meanwhile, presents images of 3D-modelled bone support and replacement products alongside the CCTV stills from the main gallery sourced from monitored workplaces – an Innovations brochure of the future, perhaps, for those interested in seeking or selling the benefits of life extension.

Justyna K. Kabala (b. 1984, Poland), received her Masters from Royal College of Art in 2011. Justyna exhibited and screened her work in various art institutions including Mostyn Art Gallery, Llandudno, ICA, Vulpes Vulpes Projects and most recently Lítost Gallery, Prague. She co-curated the exhibition programme at Copenhagen Place, an artist-run space in London between 2010 and 2012.

Tom McCaughan (b. 1986, UK), lives and works in London. He graduated from Royal College of Art in 2012. Having previously exhibited at Coleman Project Space 2014, recent group shows include Each fighting its own little battle in happy ignorance at Pump House Gallery in 2016, and Acoustic Mirrors at Diaspore Project Space in 2017.

Cian McConn (b. 1980, Ireland) is a visual artist and performer. He completed his MA at the Royal College of Art in 2012. Collaborates and performs with other artists including Vivienne Griffin I AS IN US, 2018 MNAC, Bucharest, Young Boy Dancing Group, London 2017 and is currently working with Alessandro Sciarroni Augusto to premiere at Biennial De Lyon in 2018.

Matthew Stuart (b.1987, UK) is a designer, writer, and publisher. Together with Andrew Lister he co-edits and designs the journal Bricks from the Kiln and often works under the collaborative moniker Traven T. Croves. He graduated from Royal College of Art in 2012 and presented his work in institutions including Wysing Art Centre, Tenderbooks and Norwich Outpost.