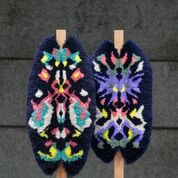 Coleman Project Space is pleased to present a solo exhibition of new works by Will Cruickshank. ‘Low Tide’, with its allusions to uncovered territories, offers an insight into the sculptor’s curious and compelling studio life: the material experiments conducted and the inventive mechanical processes developed in the production of this tactile suite of objects.

‘Low Tide’ is the first showing of Cruickshank’s book-matched slabs. The exhibition will also feature works from a new series of sliced spindles and a film made for the gallery’s Shed space, ‘Methods 2016-19’, which focuses our attention on particular processes conducted in the artist’s beautifully adapted grain-silo studios. It highlights not only the seductive and experimental nature of the mechanics in play here, but also his imaginative and resourceful use of available paraphernalia and supplies.

Cruickshank titles the works in ways that playfully reference the processes and materials used, or the aesthetic effects that may occur as a result, which bring to mind other forms of craft, design or engineering techniques. Book matching, for example, is the process of matching wood grain or marble patterns across adjoining surfaces so the details mirror one another like the pages of a book. As images, the ‘slabs’ appear more Rorschach print than constructed compositions, with the painterly abstract design at distance breaking up into a fuzzy, marshmallow field of fronds close-to, its coloured fibres appearing to have grown crop-like from each plaster ground. 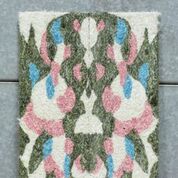 The sliced spindles, meanwhile, are exactly as described, but with no less of an impact. Again, the butterfly effect – of the woven yarn having been deliciously cut through – features here, along with a different woolly sensibility that associatively links the world of confectionary with military Busby hats and the fossil-reveal of ancient stones cleaved in half. As much ingenuity goes into creating the machinery to make both bodies of works as those designed to ‘break’ them.

As a film assembled from documentary footage, ‘Methods 2016-19’ doesn’t attempt to explain the incidental or planned parts of Cruickshank’s working processes, or situate the viewer comfortably within the studio context. Rather, it offers something of the kinetic art experience, each mesmeric movement abruptly sync’ing one to another, confounding our expectations of material and mechanical limits.