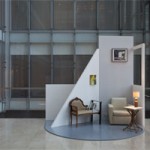 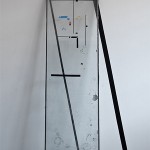 Coleman Project Space is pleased to announce David Ben White, Justin Hibbs and Helen Maurer as the artists of the eighth annual residency.

Lost Properties is a collaborative project concerning the shared interest of three artists in domestic space; as both architectural container and ideological repository for a constantly expanding lexicon of cultural motifs. With different material approaches they seek to investigate the perceived security of this ‘space’, given that our relationships with it are often informed by rather ephemeral constructs, such as memories and aesthetic trends.The artists’ staged domestification of the interior and garden spaces of Coleman is designed to acknowledge the referentially loaded nature of the white box as a starting point, and the building itself – which sits between modes of commercial, domestic and cultural operation – as the site of encounter.

In Maurer’s work, this sense is explored through the projection of light (often through glass objects to create new readings of familiar spaces): an apt metaphor for perceptual contradiction given that it can create something visually or sensorially convincing, yet ultimately immaterial.

Hibbs uses paint and tape to create drawings that play with notions of modernity, as both a past visual language and an unreachable state or place in the future. Often incorporating multiple dimensions, these works appear to shift between instructive and decorative intention: the blueprint, canvas and gallery installation.

White also quotes directly from the Modern period, creating paintings, sculptures and dioramas that identify points of collapse between modes of expression; artistic and commercial contexts. His use of display conventions – to destabilise particular aesthetic characteristics and design principles – highlights the enduring allure of the era with its purist aims, and our susceptibility to the use and commercial cache of its signature motifs.

As the title suggests, this residency explores the blurring of individual practices and ideas — the liminal spaces where boundaries begin to dissolve. ‘Property’ in this case is less an authorial position, site or element one can own than a temporary host server for a series of conversations.